Posted on February 10, 2013 by midlifegardener 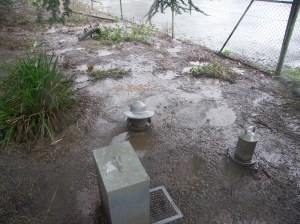 The rain teemed down again today which meant no golf as the course was closed (I reckon The Royal Wheathill will be closed for weeks at this rate) but it did mean that I was able to accompany Claire to the big event of the weekend: Potato Day at the Cary Constitutional Club.  Last night I made my debut as a model, making a guest appearance in the school fashion show to near universal hysteria (interpret that how you like) so I was taking a journey between the ridiculous and the sublime: from catwalk to garden path.

Last year we could not attend Potato Day as Claire was in hospital.  It is incredible to think it is only twelve months on from Claire’s stem cell / chemo month in Musgrove Park.  But a year ago Lynn did select a cross-section of spuds for us: Belle de Fontenay, Kestrel, Setana, Sarpo Mira as well as some stray Red Duke of Yorks – which served us well.

So we hit the Consti Early this morning to get the best little chitters – and just as well we did.  By the time we left at 11.00 the local gardeners’ elbows were being sharpened as competition for the potatoes increased.  The variety of potatoes was impressive, brought in by Pennard Plants along with onion sets, small plants and the full range of seeds.  But it was the spuds which were the main attraction – colour coded in their trugs according to first or second earlies, main crops and late mains.  We had gone with the idea of getting more Sarpo Mira – the only spuds that withstood the ravages of blight in what passed for our washout of a summer in 2012.  And also on the shopping list were repeat orders of Belle de Fontenay (a fab early salad crop).  Alongside that we decided to try some King Edwards – the very finest roasting potato. And as a wild card, Claire had read up about Ratte – like a Pink Fir Apple, but not so knobbly and a lot easier to prepare.

Of course, once we got there the sheer range of seed potatoes on offer turned our heads to some more obscure strains of potato – and that surely is the fun of it all.  Why not try something different each year?  I know the OM will have plumped for his favourite Wilja after years of spud growing, but I like the idea of trying something a little different.  Apart from anything, variety is not only the spice of life, it also surely security against such things as disease or poor weather as some might do better than others.  Or am I naive?  (yes is the resounding reply.  But I am happy in my horticultural simplicity)

Cary gardeners get stuck in to get their little chitters

That said, we did avoid anything that said that it needed “good conditions” to thrive: after last summer we are not going to rely on great growing conditions to ensure a good crop.  So after some umming and aahing, we ended up with: Belle de Fontenay (10), King Edwards (10), Sarpo Mira (12), Ratte (10), Cherie (8), Salad Blue (6).  In addition we took a scoop of red onion sets and 15 banana shallots for good measure.  Not sure we have as many potatoes as last year – but then we can always get some Wiljas from Dave Marsh to make up the numbers.

Next up, we just need to look out the egg boxes to start the chitting…

A new house and a new garden. Having spent the past 5 years mainting my father's garden I am now taking on my own gardening project down the road in a new single store dwelling. The Old Man has passed on but he remains in my thoughts as I develop the new patch
View all posts by midlifegardener →
This entry was posted in Gardening Times and tagged Agriculture, Cherie, Kestrel, King Edward, pennard plants, potato, Ratte, Red Duke of York, red onion, sarpo mira, shallots, wilja. Bookmark the permalink.