Posted on February 4, 2013 by midlifegardener

I was reading the paper the other day and saw that the Air Sea Rescue in UK is being privatised – with the venerable Sea King Helicopters being retired after 50 years in the skies.  It rang alarm bells with me, not only because on the face of it this is another misguided governmental attempt to cut costs and reduce their deficit, but also because it had me preparing for the inevitable “in my day” stories from The OM, who was – according to the man himself – a central player in the development of the flight control systems for the Sea King.

I had just had a conversation with him about how he has just started Spanish Lessons, but how he had completely forgotten everything from it within hours.  He said he was worried about his memory.  I asked how long this had been going on.  “How long has what been going on?” he did(not) reply.  But at least he is getting out a little more.

With the snow gone, I managed to get out and wander down the garden on Friday to see what was growing, what was being dug up and what had been eaten.  The bad news was that the red kale, parsley and tops of the purple sprouting have been shredded.  Tracks in the snow showed clearly that rabbits are running rife in the patch, despite the supposedly impregnable chicken wire, and the decimated crops are testament to the Lapine infiltration.

But the good news is that stuff is surviving and almost thriving.  The colour purple sprouting in the middle of the Purple Sprouting.  If there were a few leaves about them (previously ripped off by pigeons) it would look proper.  And there are also signs of cauliflowers beginning at the heart of the six-inch high plants.  Either these are a new breed of dwarf colly, or I planted them (and the slim-line swedes) rather later than I should…

Is that a colly in there?!

Still, I got to work spreading more horse manure on the old bean patch.  A couple of barrow loads, then a third as my OCD inner self could not bear to leave a covered area that was not a proper rectangle.  As I dug the manure my father’s words were in my head advising me not to use a shovel (I snapped the worm-eaten handle of one) His advice was to use a fork which would break it up better.  I mused on this as I continued with a spade.  The manure went into the barrow like slabs of rich chocolate brownie.

I had elected to use the fork to spread it, but in the meantime I broke it up in the barrow with swift stabbing motions with the spade, rapidly cutting parallel lines as I moved the spade towards me.  It occurred to me that I was using the same technique The OM used to employ to mix mortar, getting the water, sand and cement to combine with pedantic movements of his shovel as I looked on as a fascinated youngster, or bored teenager.  It made me think on all the things that I have – consciously or subconsciously – learnt at my parents’ apron strings or fork handle.  I wondered if Josh or Verity are growing up with skills or techniques that they have absorbed from us like osmosis. I am sure that there will be fewer practical skills than in the past as there is probably an app to do most things now, and failing that, one either simply replaces the whole unit or pays someone else to do it.

A good drop of stuff 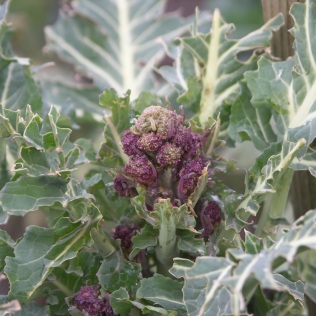 Check out the colour of my sprouting 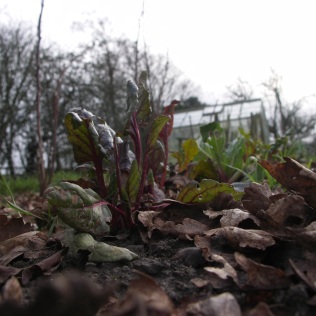 What the rabbits left

First flower in the tub

Last spring Josh had a go at doing the muck spreading.  It seemed to take him hours to do a barrow load.  This could be because he had not learnt how to do it by seeing me (snapping shovels) although it was more probably simply a matter of motivation.  There is no doubt I have far more motivation than he had in chucking horse shit on the garden, just as I never really pulled my weight in the garden when I was young, but now when I do get in the garden I have a well-developed work ethic which I could probably have done with when I was younger.

But I count myself fortunate to have the time and ability to practice what I have either been brought up with or learnt.  For the OM, the retirement of the Sea King helicopter will be a reminder of how his life has moved on and the fact that many of his faculties have been reduced.  That is why I am now in charge in the garden.  The pity of it is that while he has an almost seemingly photographic memory of past glories, recent memory – so vital for continued learning – would appear to be less effective.

So if my father is going to struggle to learn new skills, I suspect I will just have to settle myself down while he employs his abilities in story telling to remind me about how he built a helicopter…

A new house and a new garden. Having spent the past 5 years mainting my father's garden I am now taking on my own gardening project down the road in a new single store dwelling. The Old Man has passed on but he remains in my thoughts as I develop the new patch
View all posts by midlifegardener →
This entry was posted in Gardening Times and tagged Air Sea Rescue, Compost, Feces, Friday, Garden, Manure, Sprouts, Westland Sea King. Bookmark the permalink.