Posted on January 26, 2020 by midlifegardener

The gardening year – or more pertinently the planning thereof – starts for me with Potato Day at Caryford Hall.  The marquee event of January, Jules and I delayed the start of our golf round to make sure we could be there to select our first chitters of the new decade.  Always a red letter day in the gardening calendar, I made sure I was there soon after opening but was stunned to see barely a space in the car park.  Surely the horticultural fraternity was not THAT desperate to get first dibs on their desirees?   I deposited my car on the last spare bit of gravel and only then did I realise that there was a junior football match in progress nearby.  Honestly:  Cary Rangers and Potato Day being scheduled at the same time?  I’ll have a word with local traffic control.  It’s the CAry equivalent of scheduling Merseyside fixtures at Anfield and Goodison at 3pm on a Saturday.  Total madness – took me nearly five minutes to find a parking spot and, as I left, they were parking in the front of the school and ALL the way down Maggs Lane.  Honestly – it’s enough to make a neigbour post on Facebook.

I swam my way against the tide of Ugg-booted mums and gum-chewing dads and washed ashore in the hallowed sanctuary of Seed Potato Heaven where the hushed voices of woolly-hatted gardeners lent an ecclesiastical air to proceedings.  But the reality was not as calm as it seemed.  As I lined up, there was a clear undercurrent of competition to get to the best coloured trugs laid out before us.  Choosing potatoes should be a well-ordered activity, with everyone collecting their brown paper bags and sharpies (for labelling) before queueing, starting at A (for ‘Abbot’ and ‘Accent’) and moving along in a patient, well-orderd shuffle to the end of the row (‘Wilja’ and ‘Yukon Gold’).  But this year there seemed to be a faction of more serious hard-edged gardeners moving into the line, blocking off movement as they delved for the potatoes they particularly wanted.  It was subtle and deliberate with an air of what Simon Barnes called the “Bull Elephant Syndrome”.  These determined gardeners eased their way to the trugs like the dominant elephant at the watering hole, while the rest of the herd made way and moved along in their orderly line, waiting without complaint.

I smiled at the seriousness of the mood amongst some of my fellow horticulturalists, but there was light relief to be had at the stall with secondhand garden tools, where there was an impressive array of refurbished secateurs and hardware.  A cheeful chap was offering them at discount prices so I picked up a particularly vicious hack saw which I was jovially told had a japanese blade.  When I put it together with its bamboo-style handle it had the feel of something from the set of The Bridge Over the River Kwai.  Any POW armed with this tool could have reduced the infamous Bridge to sawn lengths in minutes.  I asked the price and was delighted to walk away with a Samurai Saw for three quid.

As for spuds, I tried to keep my spending to a minimum,with Mrs B’s warnings in my head to go for only earlies (“The main crop never keeps” she told me) so I started out by doing that, before giving in to tempation and buying a bag of Sarpo Mira (“they’re blight resistant” was my excuse).  For a variety of earlies I went with my favourtites – Belle de Fontenay, Duke of York for topicality (small, pink and very tasty – the way the Duke likes them).  There was also the compulsory Arran Victory and this year’s untried, left field choice is Piccolo Star.  It’s the Samuel Beckett chitter:  apparently it’s good in tubs, so I might plant up a couple of dustbins.  And then just wait… 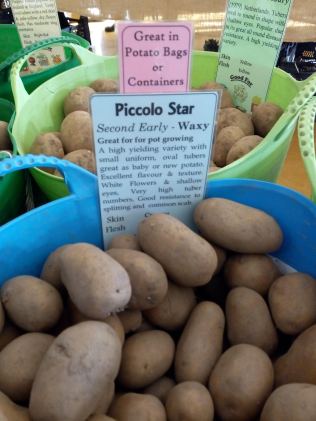 A new house and a new garden. Having spent the past 5 years mainting my father's garden I am now taking on my own gardening project down the road in a new single store dwelling. The Old Man has passed on but he remains in my thoughts as I develop the new patch
View all posts by midlifegardener →
This entry was posted in Gardening Times and tagged Arran Victory, Belle de Fontenay, belle de fontenay potato, chitter, Piccolo Star, potato, Red Duke of York, sarpo mira, secateurs, wilja. Bookmark the permalink.