Posted on January 20, 2013 by midlifegardener 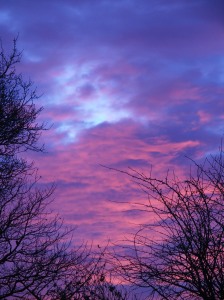 We knew the snow was coming – as sure as Christmas.  Though, like Christmas Day, we could not wait for it to arrive or quite believe it really would come and Claire, like an excitable child on Christmas morning was up peering out of the window at 4 a.m.to see if it had happened yet.  She was disappointed by the light covering that had appeared and came back to bed, a little disgruntled by the meagre offering.

But by 7 a.m, Santa had been: there was proper snow.  Not exactly blizzard, tundra type snow, but enough (Three? Four inches?) to bring the whole of the county – country even – to a sliding, scrunching, halt.  It makes for pretty pictures on shrubs and trees (albeit without any sun to make that snow glisten) but little else in the way of activity in the garden.  So I walked in to Canaryville with Claire, as she was working in the bookshop, and collected The OM’s paper.  I trudged back across the fields, avoiding any roads,  with the snow blowing horizontally into my face.  With Fudge alongside I hopped over some electric fencing, presuming that, as my ever-sensitive companion had not quaked at the vibes in the air, that the fence was not on.

Anyone seen any rabbits?

I was wrong, as a zap hit the inside of my thigh as I was straddling the single strand, with it far too close to my groin for comfort.  Leaping back like a second-rate paralympian high jumper, I decided to crawl under the fence on hands and knees, getting upright just in time to take the next step straight down a rabbit hole practically to my waist.

I stumbled home to find Verity about to set off for some sledging with her mates on the slopes over Yarlington way.  The OM came out to chat – as per usual – and in his typical “cup half empty” manner decided to quell VB’s excitement at having a day off school and a week-end of snow to look forward to, by pontificating that it would “be gone by this evening – it’s turning to rain”.  He managed to say it with such confidence and commitment that – even though I knew this was complete rubbish – I did not have the nerve to contradict him.  Instead I retreated inside to check the Met Office forecast, which duly confirmed my hunch that this is staying for a few days yet.  And I once again seethed at my impotence in the face of the Old Man’s bullshit.

Although I had to go into school on Saturday, there were no matches and – since we are a boarding school – the day was spent making sure that the pupils did not have too much spare time to get up to no good (like having snow ball fights or simply liaising with the opposite sex).  So the P.E. department was detailed off to occupy girls in the sports hall for a few hours, employing the traditional skills of whistle blowing the repetition of such commands as “stop bunching!”.

No lunch outside today

And speaking of stop bunching the hens were employing different tactics with the snow.  They clearly are not keen on the white stuff and when I went to check on them I could see two of them on the hen-house, but it took a while longer to see another was inside the house (peering through the little heart-shaped window) while Foghorn had made it up into the blue cedar – ten feet up!  Like one of the celebs on Splash, she took an age to pluck up the courage to get down off the high board when I threw them some corn.

Fudge, on the other hand, loves the snow.  She goes “cracker dog” with the feel of the snow on her belly as she bounces around the field and even makes out that she can compete with Arctic Foxes in trying to catch mice under the snow.  We know her better than that.  But one thing that is great about her in the snow is that she does not get it “balling” in her coat: she remains clean and snow-free in what we have branded her patented ginger-guard, non-stick coat. 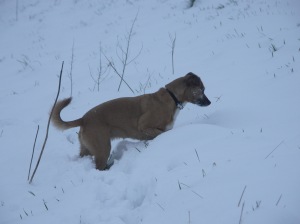 Straight out of Bruegel – The Hunter in the Snow?!

So not much planned for the week ahead, but we will keep an eye on the elderly and wait for the next great disaster: after the big freeze, the great thaw. 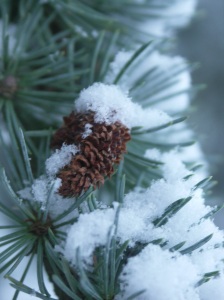