End of an Era

The snow returned on the weekend of the 17th / 18th March. This time it fell benignly and softly, covering everything overnight in a thick white insulating layer.

And overnight my father finally passed away: quietly and peacefully in his sleep. The falling snow created an atmosphere of tranquility and peace. His much-loved garden, the one that I had naively blundered around in and tried to maintain, was mothballed in a mute downy blanket. It seemed apt and the garden looked far more beautiful with its cloak of snow than it otherwise would do at this time of year.

The Old Man had become increasingly frail to the point that G had recently suggested that we might wheel him one last time down his garden.  I am glad we did not as the garden now – at this time of year – was no way for him to see it.  It was better that it remained in his mind as the veg patch on which he grew some of the best peas you are likely to see.

The creeping stranglehold of COPD had robbed him of breath and energy, and his ability to even stand, let alone walk was so diminished we were seriously thinking of trying to move him to external care in a hospice or community hospital. With this in mind it was a blessed relief when he slipped away at home, in a room overlooking the garden. The snow drifted down to cover the barren veg patch, the leafless trees and the ragged borders.  Instead all was softness and conformity as he lay quietly in bed, at ease for the first time in what seemed an age.

With his passing comes the end of an era.  He had designed and created this garden, alongside our mother and with the sometimes less than willing help of their sons.  He had lived here for 42 years.  It is difficult to imagine this 6.509 acres of Somerset not being under his control.  Even in his last 24 hours he was taking visitors and handing down instructions like the Pope or a Roman Emperor.  We waited in the kitchen while he talked to Aubrey about what he was going to do with the field this year.  He wanted to know from Jim how the garden was going, now that I had relinquished my role.  I spent a little time with him on that Saturday and was going to drop in on Sunday, but Nick’s phone call early Sunday told me it was not going to be the type of visit I had been expecting.

Instead we had to organise the confirmation of death which our good neighbourly GP friend did.  She trudged across the fields with her dog (The Old Man would have been amused by that).  The Funeral Director came to remove TOM.  I did not want to see this bit.  Dad was so peaceful in bed – I wanted that to be my final sight of him.  I had witnessed my mother leaving the house eleven years before – in a wheelchair – to die in hospital three days later.  Thankfully that indignity was not visited on The Old Man and I am pleased that he was able to pass away within sight of his garden – the garden that had given him so much pride and joy. 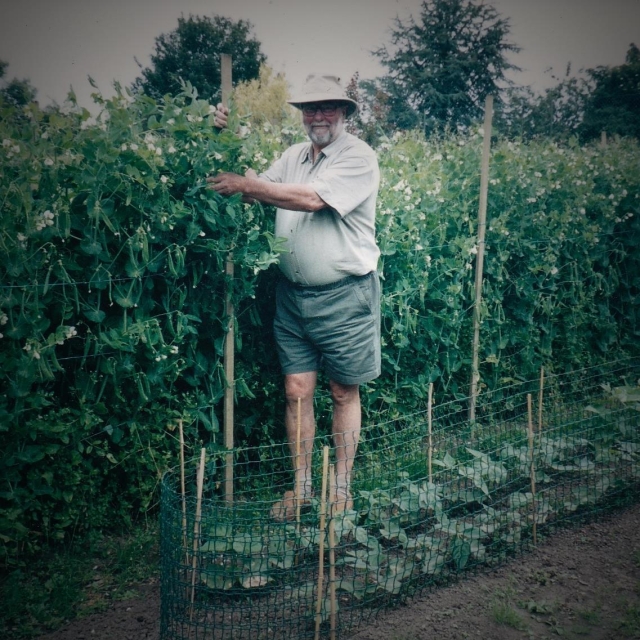 The Old Man and his legendary Hurst Greenshaft Peas 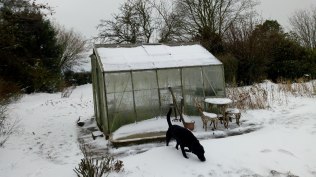 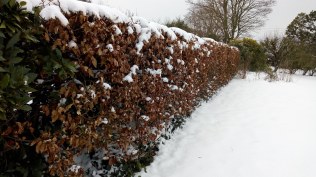 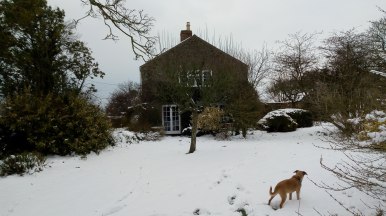 Crab Apple with TOM’s bedroom beyond

Brussels Sprouts – where it all began for me 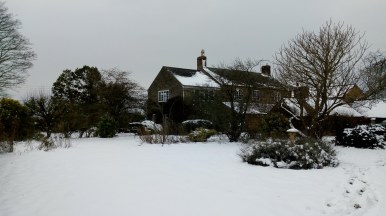 A new house and a new garden. Having spent the past 5 years mainting my father's garden I am now taking on my own gardening project down the road in a new single store dwelling. The Old Man has passed on but he remains in my thoughts as I develop the new patch
View all posts by midlifegardener →
This entry was posted in Gardening Times and tagged hurst greenshaft, peas, snow, The Old Man, veg patch, vegetable garden. Bookmark the permalink.

15 Responses to End of an Era