Back to a new term and the new garden as we prepare to put my father to rest on Monday.

Potting Shed being put to use

It has, of course, been a strange time – the combination of funeral arrangements, sorting The Old Man’s estate and domestic affairs, combined with family matters has kept me occupied through the latter part of the holidays. Having a six-day break in Arran was a much-needed breather and by driving eight hours north we also found far better weather than the West of England enjoyed.

We are now at school in at what is amusingly labelled the summer term. It would have been nice to have had a few days in the garden in the latter half of the hols, but the rain has been incessant and in one of the few dry intervals when I tried to cut the grass, the mower broke.  Getting the garden under control does is not coming easily.

Still, I am glad I made the investment in the greenhouse allowing me to plant plenty of seed trays.  The potting shed is coming into its own with the last surviving hen keen to help out on occasion.  Everything is late, but we finally have some tomato seedlings poking through as well as Cavolo Nero, cabbages and PSB.  I thought we had some chillis up, but they turned out to be mushrooms. Not what I was expecting at all.  They grew one day, died the next.  Hey ho.  Might need to look at a different brand of potting compost.

On the upside, the potatoes are looking well chitted and are more than ready to get into the ground. The down side being that I have not been able to prepare any beds in the waterlogged clay soil.  I have the frames for the raised beds, but no compost or topsoil to go in them.  That’s a plan for another week. 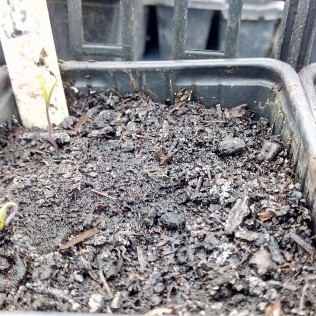 One small tomato for man..

A new house and a new garden. Having spent the past 5 years mainting my father's garden I am now taking on my own gardening project down the road in a new single store dwelling. The Old Man has passed on but he remains in my thoughts as I develop the new patch
View all posts by midlifegardener →
This entry was posted in Gardening Times and tagged cavolo nero, greenhouse, hen, potato, potatoes, potting shed, psb, purple sprouting, tomato, tomtoes. Bookmark the permalink.