And so here’s the summer, and what have we done? Another Easter over and a new term begun…

Easter is an exciting time of year, with the greenhouse beginning to burst at the seams with seed trays which themselves start to creak under the weight of rapidly shooting plants. The earth is beginning to warm under the longer days of a more powerful sun.

Not that the Old Man thinks that we should be thinking about planting anything out right now – way too cold. And my age is showing as I was in a mind to agree with him.  But Mrs B went on a day course to learn about preparing flowers for weddings (not one in our family I hasten do add) with Georgie Newberry at Common Farm Flowers (author of several books on flower farming – available, as always at Bailey Hill bookshop). Georgie was firmly of the opinion that down here in Somerset we are able to start planting seeds outside as we are not likely to get anything like a major frost. So what do I and the Old Man know about it?

So I will shortly be planting all sorts of exciting things in the garden, but in the meantime I have, over my luxuriatingly long school holiday, managed to plant and germinate a whole host of stuff:

We did plant stuff in the great outdoors over Easter getting the potatoes in on time and also onions and shallots.  And this weekend we broke out from the greenhouse by planting the broad beans and sweet peas.  Fingers crossed we don’t get that late April cold snap the old gardeners like to warn us of.. 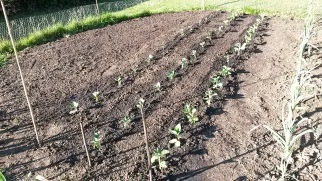 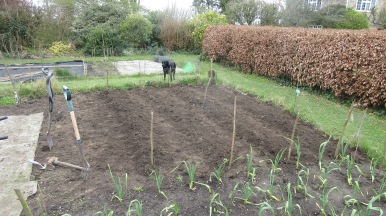 A new house and a new garden. Having spent the past 5 years mainting my father's garden I am now taking on my own gardening project down the road in a new single store dwelling. The Old Man has passed on but he remains in my thoughts as I develop the new patch
View all posts by midlifegardener →
This entry was posted in Gardening Times and tagged baileyhill bookshop, basil cabbages, brokali, cape daisy, chillis, Commonfarmflowers, courgettes, leeks, marogold, Nicotiana, peas, potatoes, purple sprouting, rudbeckia, zinnias. Bookmark the permalink.