Posted on April 2, 2016 by midlifegardener

My memory fails me.  It always has.  But these days I do not seem to have the faculties to hang on to the most basic information.  I could not even remember the names of charities I give regular donations to so trying to remember the names of flowers is mostly beyond me.  I have taken up learning Spanish in a vain attempt to kick-start my neurological faculties, but so far my elder brother’s fears that I will soon start speaking  espanol more fluently than him are completely unfounded.  No te preocupes, Paul.

One of the unfortunate side effects of living next door to my father and delivering his paper to him each day is that I can see first hand where my symptoms might have their origins and where they are headed.  Genetics can be blamed for so much.  The other day the OM told Mrs B that he was thinking that we could make a wooden herb trough  outside the back door and that he knew where to source some wood.  The fact that the trough was my idea, the wood had been sourced by me (discards from the edge of the astro at school) and that Mrs B would already know all this, seemed to elude him. Selective memory, perhaps.

And yesterday he was cursing his luck that a birthday invitation he had received fell on the exact same day that we have agreed for the family party in the summer:  11th July.    I demurred and told him that the family party was on 2nd July.  He was relieved – but then exasperated and even a little deflated when I took a look at his invitation to see it was for 11th JUNE. He had not only got the date of his own party wrong, he had mis-read the date of the new invitation.  I don’t get annoyed – I worry that this is what I have to look forward to.

And I pity my wife and children.

Mind you, Mrs B already has a handle on this.  I identify with Tim Lott writing in the Guardian, speaking for many middle-aged men, who claims his memory is not as bad as his wife and kids tell him it is – but he has no way of knowing.  How can you know?   There is probably a way of ascertaining it, but I have will have forgotten it.

In the garden the only way I remember what tasks await me is to walk around and actually SEE what I need to do.  Always been a bit of a visual learner, me.  Mrs B makes plans; I just react to what I see and take it as it comes.  I guess that is one of the reasons we have made it thus far in our partnership, still able to remember the good bits and laugh about whatever might have slipped my (our?) mind.  Milan Kundera had it about right when he wrote that

(The Book of Laughter and Forgetting)

Preparing the rose garden – herbs out 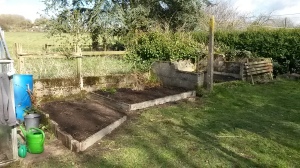 Where did you get that wood?

I beg your pardon? 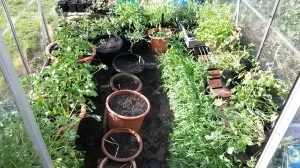 Raununculus and sweet peas “rocketing” up

A new house and a new garden. Having spent the past 5 years mainting my father's garden I am now taking on my own gardening project down the road in a new single store dwelling. The Old Man has passed on but he remains in my thoughts as I develop the new patch
View all posts by midlifegardener →
This entry was posted in Gardening Times and tagged flowers, herbs, kohl rabi, laughter and forgetting, memory, milan kundera, raised bed, raununculus, rose garden, roses, sweet peas, tim lott. Bookmark the permalink.