A year ago I wrote about my gardening buddy Fudge.  This is an update on my “Home Help” as I now have two such assistants.

April is here and the baby bunnies are gamboling in the increasingly warm sunshine. 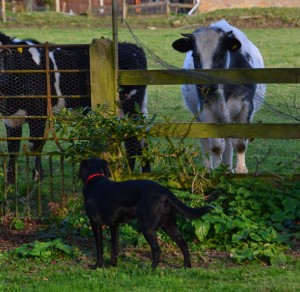 How do you get to the other side?

Although gambling would be a better description as, with two crazed dogs lurking in the garden, the young buns are looking out-gunned. The first morning of combat saw both dogs trying to burrow into the prickly Berberis at the end of the boomerang bed.  Ella, thick in the fur and thick in the head was able to go in deepest, flushing a rabbit out which passed Fudge heading rapidly in the opposite direction.  She didn’t see it, but both dogs headed off in hot pursuit.

A little while later I found Fudge, licking her lips, with the upper half of a half eaten rabbit nearby.

There was more success on greenhouse cleaning day, when Ella triumphantly retrieved another slaughtered fledgling rabbit for us.  Pleased as punch, she was.  For convenience, Claire put the corpse high in the plum tree – out of reach of the dogs until such time as we could dispose of the body more conveniently, without Fudge and Ella following the scent out of the garden.

Later, Ella was looking concerned, growling and even raising a bark (which is unusual for 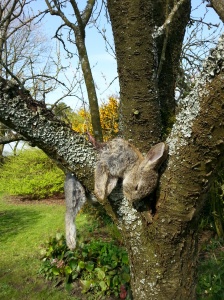 Out of harm’s way

her) as she came back to the house.  I took my nervous labrador down the garden, only to discover the rabbit had disappeared.  There was no doubt it WAS dead, but, well, you know, it being Easter and all, was there a chance that this rabbit had risen again?  With no sign of any stone being rolled away and with the only apparent witness to the miracle being a dumb labrador, we are left to surmise on possible explanations.  The best I could come up with – other than a new Lapine messiah or a rabbit zombie – was that Ella had been spooked by a bird of prey taking the rabbit from the cross.  Tree.  I think a buzzard rising from the plum tree would be enough to scare most puppies.

So, with fewer rabbits to chase, my intrepid / naughty dogs have turned to escapology, finding ways out of the garden.  Fudge is the leader of the escape committee: if she gets out, Ella is all too easily led astray.  So with Fudge tied up, Ella has no inclination to escape.  But Fudge is still able to do her Houdini impersonations even on the String of Shame, managing to make off around the corner and over the fence.  You will need to look at the gallery to understand – it’s more of a visual joke.

As a footnote, we will continue to tie Fudge up in the garden, although my mother-in-law 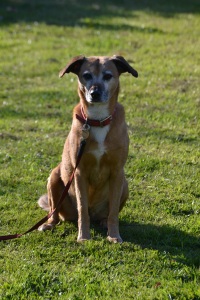 Back on the String of Shame

is of the opinion that Fudge should just be put down.  As Claire’s parents are currently involved in moving from their own nice two bedroom bungalow, with beautifully tended garden (which her dad adores) to a small rented property nearby with only a patch of grass, overlooked by close neighbours, the similarities with Fudge’s desire to wander are uncomfortably close.  The old bitch has a perfectly lovely house and garden to live in, but is causing angst and stress to the others in the house by always wanting to be somewhere else – not appreciating what she has and always looking at the grass on the other side of the fence.  Solution?  Have her put down.  Hmmmmm…

As she is more likely to stay in the garden, Ella is proving to be more of a companion than her partner.  Although she does still have one or two habits which will take some work ridding her of.  For a start, she has little idea of boundaries within the garden and rummages through flower beds as well as trampling vegetable patches.  Chicken wire is a minimal deterrent for her.  And secondly, like all Labradors, she has an “eat first, ask questions later” approach to anything remotely edible.  So the intestines of an adult rabbit she ate the other day were duly deposited all across the kitchen floor an hour later.

So, very companionable, but not a great deal of help still.

Perfect – hold it there

Theseus, where IS Fudge?

A new house and a new garden. Having spent the past 5 years mainting my father's garden I am now taking on my own gardening project down the road in a new single store dwelling. The Old Man has passed on but he remains in my thoughts as I develop the new patch
View all posts by midlifegardener →
This entry was posted in Gardening Times and tagged berberis, buzzard, labrador, rabbit. Bookmark the permalink.