There Must be a Pony

Posted on March 6, 2014 by midlifegardener 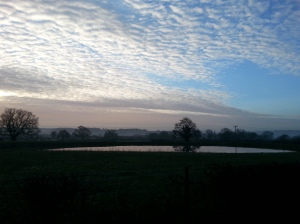 So what shall we talk about this week?  Well, let’s not start with the weather.  That is frankly dull.  Yes, there has been more rain, but just occasionally there has been some sunshine.  Unfortunately this has mostly tended to coincide with our travels (travails?) to family gatherings across the southern UK, but there have still been enough dry interludes to allow me to actually do STUFF in the garden.

Having said that, the fallout from the Atlantic frontal attack has managed to keep me amused on our regular dog walking route, with the presence of the man-made duck pond along the lane.  At the planning and drawn out construction stage, this was touted as a lake, but in post-production it has been rather overshadowed by the flooding in the next field which is a far more impressive stretch of water.  The former is a mere puddle next to the latter on which one could be tempted to conduct an attempt on the world speed record.

Rubbish Walk in the Country?

This duck pond took an age to build – and involved the use of a long list of building materials to construct the embankments: including dead trees and whole drums from broken concrete mixers to any amount of builders’ waste and broken drainage pipes.  I never realised you needed such an array of building materials to make the perfect swan lake.  But it turns out you don’t need all that – unless, of course, you are just looking for a place to dump a load of waste.  No, all you really need is a slight depression in your field, and the wettest winter on record, and your lake is as good as done. 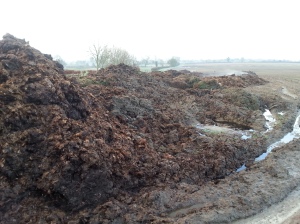 Mind you, our dog walk still traverses an awful lot of detritus on the fringes of the field, so perhaps there is another pond in the pipe line, as it were.  There is an increasing amount of horse manure.  It reminds me of the joke (apparently one of Ronald Reagan’s favourites) about the eternally optimistic son who is so pleased about being given barrow loads of horse shit, he excitedly digs into it saying “there must be a pony in here somewhere”.  Even when you are in a pile of the proverbial, there could still be a positive outcome.

And even on a dank walk one can look at the bright side.

So, with a slight lifting of the winter rains I have actually been in the garden.  I finally managed to move the snake bark maple from next to the oil tank to the part of the Boomerang Bed vacated by the heather.  It seemed a simple task, but it’ll probably cost me another wedge of osteopath’s fees as I put my back out again digging the darned thing out.  But I’m pleased with the result.  And Ella hasn’t dug it up.

And talking of pulling things up, I have to report that Claire has been removing some of the unwanted veggies in the garden and feeding them to the voracious hens.  So the old Calabrese have gone and a few cauliflowers which never produced.  And some of the white sprouting – which had also not produced, although in their case that is simply because Claire has not given them time.  I managed to save the last four plants from a death by a thousand pecks – and am pleased to report we will actually have some white sprouting soon.  Shame about the rest.  I hope the hens appreciated them…

Elsewhere we went to Potato Day at the Consti Club and picked up our little chitters.  Belle De Fontenay, Cherie, King Edwards, and Sarpo Mira to repeat last year’s.  Plus Arran Pilot (as a nod to Nick’s residence there).  So all looking set, and I finally got around to ordering some garlic, which I have decided (due to my slothfulness) to plant in the spring.  Theoretically I could plant it now, I think, but the ground is still too wet.  Which makes me think if I had planted it in the autumn it would probably have just rotted away by now – thus justifying the decision to plant in the spring.

With the ground still sodden, I have transported twenty barrow loads of manure from the field.  Looking at the garden now, I really do feel there must be a metaphorical pony.

Things are looking up.