The Turn of the Year

Posted on December 31, 2012 by midlifegardener

It’s New Year’s Eve – a time to look forward to the clean slate of a fresh 12 months of hope, promises and ambitions.  But it is also a time to reflect and it is in that mood that I am spending this year-end.

2012 was a year in which we as a family put paid to the shadow of major illness, so far as Claire is concerned, with  her final course of chemotherapy and stem cell transplant to guard against recurrence of AITL non-Hodgkins Lymphoma.  And it was not long after the completion of her treatment and while she was in recovery that I started this blog. 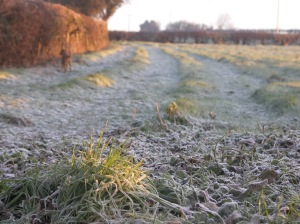 I have said before that I feel closer to the memories of my mother when I am gardening and to some extent I suppose there is an element of the Keatsian search for the eternal.  I have a heightened sense of the turning of the year and of the natural world about me.  I am but a small part in the great scheme of things and it all helps to keep my sense of perspective in other aspects of life.

Keats looked for eternity in the song of the nightingale and the repetition of the seasons.  The trees in the garden or field have a air of permanence about them, but that is coloured by the brooding menace of ash dieback on the horizon.

For Keats perhaps eternity culd be found in the bold robin getting under foot as I dig; the bright crisp morning when we get up to let the chickens out; or, more pertinently today, the drenching rain that puts paid to any serious work outside and leaves the hens lurking in the undergrowth like refugees.

The rain seems to have been falling for an eternity, though we were lucky with our Christmas break in Arran – of which more in a subsequent post, hopefully – but when the rain stops I will be out there to get stuff going.  It won’t be long before spring will be with us and I will want to be ready for it all – with good planting plans and a well prepared garden.  Even now, there are shoots coming up in the tubs by the door, and with the crap weather at least I have my seed catalogues to divert me with thoughts of the long hot summer to come, and no worries about droughts… 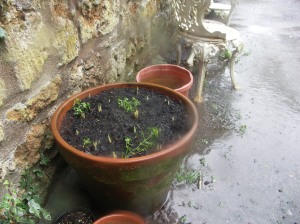 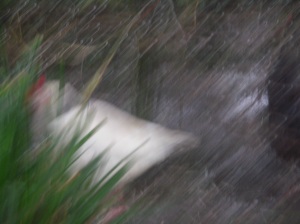 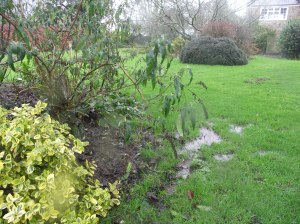 A new house and a new garden. Having spent the past 5 years mainting my father's garden I am now taking on my own gardening project down the road in a new single store dwelling. The Old Man has passed on but he remains in my thoughts as I develop the new patch
View all posts by midlifegardener →
This entry was posted in Gardening Times and tagged aitl non-hodkins lymphoma, Christmas, keats, New Year, New Year's Eve, Non-Hodgkin lymphoma, robin, rrain, seed catalogue. Bookmark the permalink.