Posted on December 7, 2012 by midlifegardener 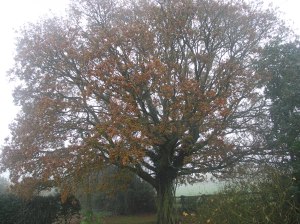 Some leaves still on the oak

It’s been a while since I posted.  Much of my time has been involved at school in playing tournaments against some of our keenest rivals as well as trying to maintain diplomatic relations with some of our scholastic neighbours – all of whom are trying, though not succeeding, to give us a beating.  In the meantime the garden has survived a battering with heavy rain and high winds, so I haven’t managed a lot work out there.

At the start of the month, though, I did manage to hit my best round of golf ever – 72 (on a par 68).  Sounds pretty spectacular (net 12 under), although one must take into account winter tees and greens for most of the round which shorten the holes by about 50 yards and make for two putting at worst.  But my irons were good and golf seemed a pretty easy pastime for a moment or two. 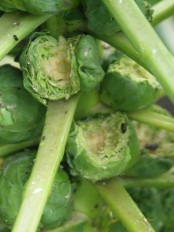 Who’s been eating MY Brussels?

And one can get into a false sense of security with anything when it is all going well.  The brussels and purple sprouting have been going brilliantly and looking fab.  With a couple of good frosts even TOM will have accepted that we can eat the Brussels.  Except for the small matter of rodent damage.  The mice have been getting to them before us – nibbling the small tender ones at the top.  We put down the mouse traps that worked so well on  TOM’s Brussels earlier in the summer (although he subsequently allowed them to be shredded by caterpillars).  But no mouse was caught – and weirdly there are no traps there now.  I think a rabbit has pushed under the fence – or is it rats? – so did they make off with the traps?  Beats me.  There’s some odd stuff going on out there.

I did manage to plant my garlic the other day.  Couldn’t decide what type to get so got a about 12 different varieties – and planted the lot.  So we will have our own garlic festival come the summer.  Chesnok Red, Early Purples, Elephant…you name it, we’ll be trying it. 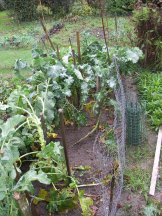 More advice was forthcoming from Jim the Strim, who after tidying the hedges was giving me the heads up on needing to stake my greens.  He was right:  the purple sprouting was falling over and about to lose its roots, so I spent Monday morning, before school, giving support to them.  The rain lashed down, but somehow I neither noticed nor minded.  It was far more satisfying and rewarding than any amount of dealings with other schools and their staff who have an overinflated sense of their own self-importance and their schools’ talents.  I felt grounded – literally and metaphorically.

Even this time of year retains a sense of promise.  I feel like I am preparing presents that will not be opened till the warm summer days are with is. 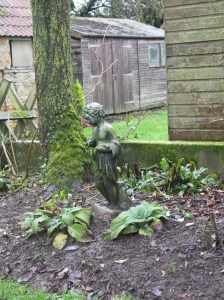 Standing guard over the bulbs…

Forget Christmas and all the angst of finding the right present for everyone – I like the idea of planting  a few tulips or crocuses as Nick gave me for my birthday, and looking forward to the arrival of them in the spring.  Which is all well and good so long as the rabbits have not dug them all up by January, or the mice haven’t eaten the Brussels, or the greens haven’t toppled over.  In sport, as in life, as in the garden, it wouldn’t be any fun if it was all too easy 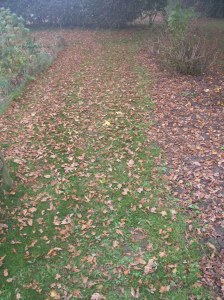 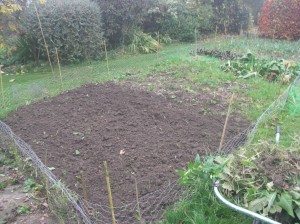 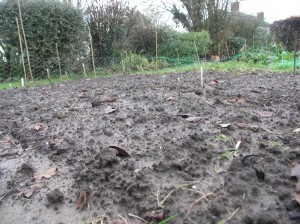 Cutting the beech back – thanks Jim