Posted on January 1, 2019 by midlifegardener 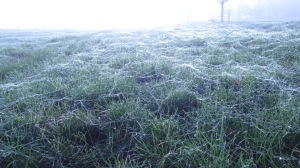 New Year’s Day and all is quiet about the garden.

“I hear people describing the days following Christmas Day as ‘flat’. I am of another mind. They are peaceful days, gentle days that are as much a part of Christmas as those leading up to Christmas Eve.”

Amen to that. In amongst the celebrations and intermittent scurryfungeing we must not forget to take time out to reflect and appreciate the good things in our lives. The lull after Christmas gives us a moment to reflect.  And we can also cheer ourselves with the fact that we are past the shortest day of the year – the Winter solstice was on 21st December – so from now on, as Rob MacFarlane said (retweeted by our Nigel again)

“light begins its slow climb back and night yields its reach.  Midwinter, yule, the year’s pivot, Earth’s rebirth, a dawn of hope.”

And in the garden the rebirth and dawn of hope is well under way.  The Hellebores were true to their alternate moniker (Christmas Rose) flourishing outside the patio doors.  Even many of the “annuals” are looking far more hardy than I imagined, having survived from the summer and forming buds already.

And throughout the borders bulbs are spearing upwards through the cool damp soil.  The identity of many of these bulbs is a mystery to me as, like a squirrel with nuts, I haphazardly buried many of them in the autumn, fondly believing that I would remember what I put where.  Now I am engaged in a slowly evolving version of the Memory Game in which I will preogessively discover if my guesses are correct about the location of daffodils, aliums, tulips, ranunculus, muscari and whatever else I might have planted.

Perhaps my New Year’s Resolution should be to plan more carefully. 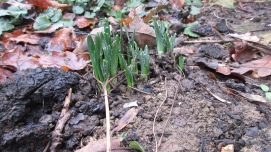 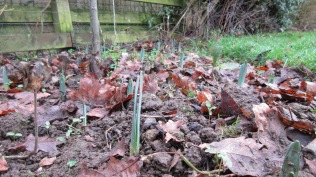 Frog – not impressed with my greenhouse maintenance

Greenhouse in need of clearance

What you shouting about?

A new house and a new garden. Having spent the past 5 years mainting my father's garden I am now taking on my own gardening project down the road in a new single store dwelling. The Old Man has passed on but he remains in my thoughts as I develop the new patch
View all posts by midlifegardener →
This entry was posted in Gardening Times and tagged aliums, christmas roses, daffodils, frog, hellebores, muscari, ranunculus, robin. Bookmark the permalink.

2 Responses to The Year’s Pivot