Posted on September 19, 2018 by midlifegardener

On Sunday  I removed more of the front lawn to widen the border and plant the final Sweet Williams.  It is a small development I have been planning for a while as there is little room elsewhere for the Mrs B’s favourite cut flower, but if I had needed some ideas for more garden design then our trip to Hestercombe Gardens on Saturday would have provided them in spades (and wheelbarrows).

I have to admit to complete ignorance of Hestercombe prior to receiving my brother-in-law’s Christmas gift of vouchers which allowed us entry to the gardens with afternoon tea in the Column Restaurant.  The gardens are stunning in a variety of differing styles, from the English landscape behind the house, to the formal gardens next to it as well as the Victorian shrubbery (“a shrubbery?!”).  But the real star of the show is the Great Plat: designed by Edwin Lutyens and complemented by planting from the great garden designer Gertrude Jekyll.

What makes the Plat so interesting is the different levels and the use of water throughout it in rills, ponds and trickling waterfalls, all lined with local stone.  The planting follows what could be a strongly linear design but softens it with borders of bergenia and other  subtly coloured silver and greys.  Some of Mrs B’s pet hates were there, but even she had to say that in this context Canna Lilies and peach coloured gladioli looked just right set against the bergenia.  Cannas were something my mother would plant around the sun-dial at the old place and were the first things we replaced when we planted lavender.  They are not unattractive plants – they just need the right context.  And Hestercombe is able to do this as the Great Plat has the size and structure to accommodate some sizeable and numerous plants including some magnificent Japanese Maples as well as vines over the impressive pergola.

There was a video giving a brief history of the house and garden.  The sunken parterre was an enormous undertaking in terms in the movement of tons of soil and the quarrying of rock from the estate to build the beds.  It illustrated just how much work went into it.  But when you have such a vast estate, as the owner Edward Portman clearly had at the turn of century, one simply employs a lot of men to sort it for you.  Although it had fallen into disrepair, it is has been restored over the past twenty years and looks close to its former glory now.

Of course the main reason we had gone was to have a champagne afternoon tea, so the  walk round the gardens was essentially killing time prior to our date with tea and cakes.  But we were blown away by the brilliance of the gardens and would heartily recommend a visit.  We managed to fill a couple of hours easily, courtesy of some stunning views and the fact that our tour was directed by Mrs B who had control of the map, so we went a little further than we at first envisaged.

But it served to whet our appetites for the excellent afternoon tea which, after choosing one of the many varieties of tea, involved consuming an impressive selection of sandwiches, cakes, a compote, sausage roll, and scones.  All washed down with a very palatable glass of English sparkling wine.

We waddled back to the car, replete. 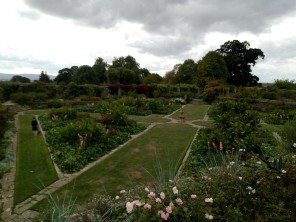 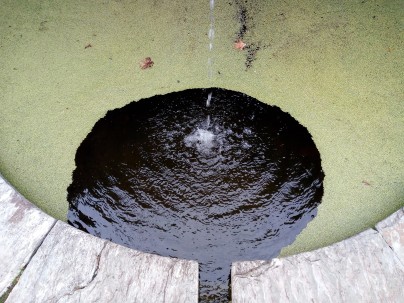 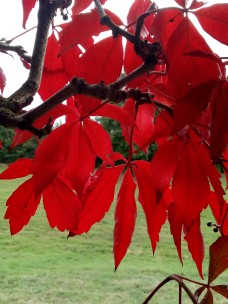 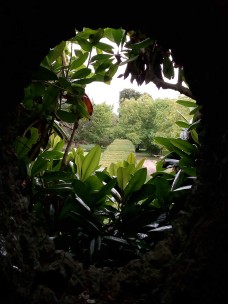 A new house and a new garden. Having spent the past 5 years mainting my father's garden I am now taking on my own gardening project down the road in a new single store dwelling. The Old Man has passed on but he remains in my thoughts as I develop the new patch
View all posts by midlifegardener →
This entry was posted in Gardening Times and tagged bergenia, canna, canna lilies, edwin lutyens, getrude jekyll, great plat, hestercombe. Bookmark the permalink.