Posted on January 5, 2016 by midlifegardener 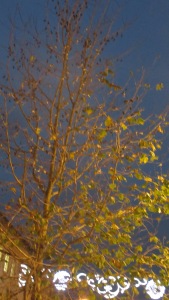 Mary Poppins the musical is back doing the rounds and so I somehow got an ear worm in my head that is straight out of the show. Ear worm is an apt description as the song is “Feed the Birds”.  It was always something that the parents did and the Old Man has always been diligent in keeping the feeders full of nuts.  in recent winters the main recipients have been rats who have climbed the wisteria to hang on the wire cage and feast.  This year TOM has not been putting food out for the birds (or the rats) yet. Whether this is because the weather has been so mild our feathered friends really do not need any more sustenance I am not sure.

In years gone by we would be asked to delay pruning the Cotoneaster until the birds had been able eat all the berries, but frankly I have never seen any self-respecting fieldfares helping themselves to the red plenty.

But we have found other ways in which to provide for the wild bird population.  A year or two back the starlings would flock around the hen run and clean us out of layers pellets and corn. It cost us a bomb to keep re-filling the feeder – making for some of the more expensive free range eggs around. We now have a feeder that is not accessible to small birds so that is sorted.

Equally, I have put an end to providing fodder to the pigeons, who after I had netted the purple sprouting, turned their attention to the kale and when I covered that, they started to shred the brussels. Can’t fault them for taste, but it amuses me how easily they are put off feeding by a bit of green net.

Birds I am happy to aid in their five-a-day nutritional requirements are obviously the robins who appear as soon as I pick up a fork. Robins act like they are your chums and at Christmas they appear all sweet and festive on cards and the like. But they are fiercely territorial and pretty damned belligerent towards each other. So not all that cute.

The other piece of bird-friendly activity I finally did yesterday was to take the netting off the raspberries – thereby allowing birds to rummage in amongst the canes for any old fruit or other stuff.

And all day long I was humming along “tuppence a bag”…

A new house and a new garden. Having spent the past 5 years mainting my father's garden I am now taking on my own gardening project down the road in a new single store dwelling. The Old Man has passed on but he remains in my thoughts as I develop the new patch
View all posts by midlifegardener →
This entry was posted in Gardening Times and tagged Brussels, chickens, feeder, fieldfare, kale, psb, purple sprouting, raspberries, rats, robin, starlings. Bookmark the permalink.