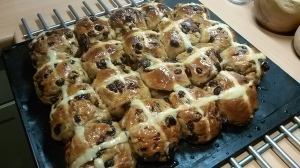 It’s Easter and bunnies are very much of the moment around here as Ella once again caught her very own Easter Bunny when VB took her for a walk. In Ella’s defence (and the rabbit’s for getting caught by a lugubrious black lab in open grassland twenty hops from the safety of the burrow) there is a lot of myxomatosis around at the moment. So perhaps Ella is doing a merciful task putting rabbits beyond pain before they become too sick. A canine Dignitas for rabbits – though not so dignified for Verity who struggled to get her retriever to drop the still warm, possibly breathing, rabbit.

Who’s been digging in my bed?

Down the garden there was evidence of rabbits in the garden as one part of the chicken wire seemed to have been pushed down before a couple of random holes were dug in the onions.  No onions were harmed in the skirmish but I have since got another couple of rolls of chicken wire from Swift Huts and renewed the rabbit proof fencing around both veg patches.

In addition to a mass of full seed trays, another sure sign of spring is the sound of the rotovator. The old Howard never fails you.  It can sit in the Cow Stall all winter, unloved and seemingly forgotten, but comes out in the spring like a Grizzly Bear from hibernation ready to take all before it.  It never fails to start and apparently needs no maintenance.  It is a marvel.  Or so I was saying as the clutch went half way through digging the salad bed….

I had a feeling it would be easy to mend, but neither myself nor Jim could see it so I was forced to ask the OM to tell me how to re-attach the wire.  I am increasingly worried by his lack of mobility and unwillingness to walk further than the garage and back, but such was the importance of the issue, he made it down the garden to stand on one side of the chicken wire and instruct me on how to mend the machine.  Fortunately it was done in a trice and hopefully the exercise did him good

In the main veg patch I have gone all “No Dig” this year, with the cardboard  keeping the weeds down, so I was able to plant the spuds with relative ease.  I have a combination of Belle de Fontenay, International Kidney, Cherie, Pink Fir Apple, Sarpo Mira and Sarpo Una.  It looks pretty good – apart from the cardboard bits.  While digging them I got an ear worm of “No Surprises” by Radiohead…”A heart that’s full up like a landfill…”

But this job is not going to kill me – it’s what makes me feel alive.

Salad coming up in the Greenhouse

Sweet Peas a couple of weeks ago

Dahlias and Alstramurias coming up

A new house and a new garden. Having spent the past 5 years mainting my father's garden I am now taking on my own gardening project down the road in a new single store dwelling. The Old Man has passed on but he remains in my thoughts as I develop the new patch
View all posts by midlifegardener →
This entry was posted in Gardening Times and tagged Aubergine, aubergines, basil, broad beans, Cabbages, Charles Dowding, coriander, curly kale, Easter bunny, howard rotovaotr, labrador, No Dig, no surprises, Onions, peas, Peppers, rabbits, radiohead, retriever, rotovator, sedd tray, seeds, squash, sugar snaps, tomatoes, uchiki kuri. Bookmark the permalink.