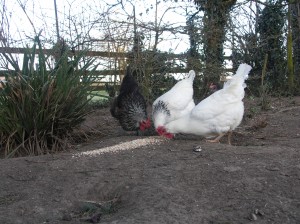 Apparently spring is just around the corner.  It’s just that every time I think that now would be a good time to start getting some seeds in, actually PLANTING stuff, the wind veers to the north or north east and we are hit by air that would have brass monkeys running for cover.  It’s a convenient excuse for not doing anything significant as I am in the midst of the end of term report writing and end of season hockey stuff – assessing coaches and players alike. 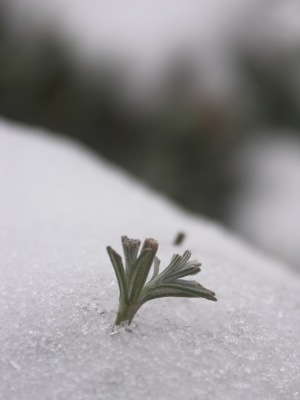 It got me thinking how these days we have a total overload of information and the capability to throw more information ourselves out into the world (of which this post is but one insignificant example).  As I climbed into my increasingly recalcitrant car on Thursday to go to early morning fitness training (recalcitrant would sum up my mood at that time too), the dashboard did cheerfully inform me that it was -7 degrees.  I did some maths for the wind chill and decided it “felt like” minus ten.  Years ago I would not have known this – just agreed with my colleagues that it was “bloody cold” and got on with life.

Now we know what temperature it is, what it is  likely to be this afternoon, or next day, what the traffic will be like going into work, what might be happening when we get there, because we check our emails and texts on the move, and can respond before we are even in.  Everything is of the moment.  We want it now. 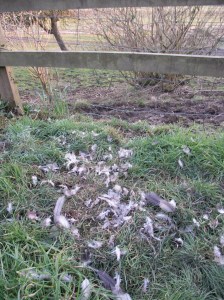 The Scene of the Crime

Shopping is an equally instantaneous act.  If we want it we google it and we buy it.  So on Thursday when Claire discovered that three hens were missing (Speckle, Sydney and Bluebell were absent and failed to make lights out.  Gone for good), we made the immediate decision to replace them.  It was galling, as these four hens were really hitting their stride in egg production and we were getting four a day most days.  That’s more than we need:  I mean, there are only so many times you can have poached or scrambled eggs for lunch followed by a good sponge smothered in home-made custard…

So a quick trawl on the internet, locate the place we got the others from, phone the farm, and hey presto the next day Claire returns home with three new hens – identical to the three casualties whom Mr Fox had taken (why Mr?  Could be Mrs , you know).  In the meantime I had discoveed evidence of one hen’s demise on the other side of the lane from us. Claire did the forensic analysis and pronounced Bluebell a gonner.  The other two were officially listed as Missing in Action – presumed to be Fox Fodder. 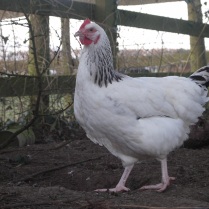 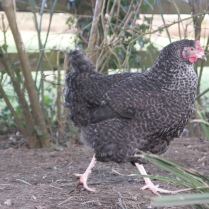 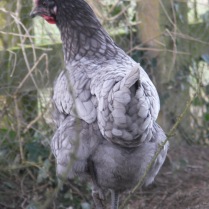 There was a feeling of spring in the air – or more accurately, Easter – as Claire brought the three new hens to introduce them to the remaining Gold Star (Foghorn by name).  But as she placed them in the compound, up stepped Speckle, risen from the dead, running in from the garden.  And as if stepping out from a bad re-make of the 6th sense, Sydney appeared from the corner of the enclosure too (having rolled away a stone, I guess).  So it turns out that only Bluebell failed to make it back from enemy lines, and we now have six hens.  Claire’s quite happy with this, but as soon as the “point of lay” arrivals start to do the business we will be selling eggs like crazy.

So this morning – in the dry and relative warmth (my car says plus 5) I have managed to shore up the fencing, mend holes and extend the high wire to ensure all six can get on well enough.  That said the pecking order is undoubtedly in favour of older ladies who happily hunkered down in the hen-house last night while the newcomers decided that “no – honestly – we are very happy to roost in this tree”.  So there they still were in the tree this morning looking a little scared of heights (or just the three bullies below). 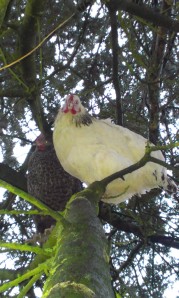 How do I get down?

But they survived.  For now.