Don’t Say What You See 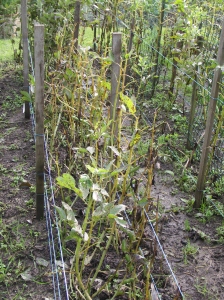 Send My Regards to Broad Beans…

Prince Charles has been ridiculed in the past for his admission that he talks to his plants to encourage growth.  Looking over my desolated veg patch this week, if HRH had had a look he could have been forgiven for thinking that I might have been saying rather nasty things to my plants.  The broad beans are black and increasingly wizened, and the potatoes, with nothing above ground, now look like Iron Age long barrows, awaiting grave robbers to dig up the treasure within.   If anyone has been talking to these plants, it would probably have been someone from the John Terry school of elocution.  What might pass for “banter” on the professional football pitch would definitely be banned in the allotment.

Admittedly, the more banal explanation for the sorry state of the beans (and spuds) will be the weather – in particular the position of the jet stream which is doing its very best to break every precipitation record in the book this summer.  But talk of the weather is also banned in our house.  Claire has been threatening to put a sign up in the bookshop to warn potential customers that “yes – we know it is raining outside, that it has been a crap summer and we too are fed up with it.  But most of all we are fed up with every single (JT expletive deleted) customer telling us this”. 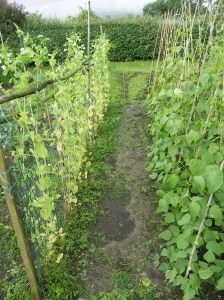 The other reason we are not discussing the weather in our house is because our Silver Wedding Celebration is planned for this Saturday – in the garden.  Jim told me yesterday that he thought that we should be OK this week-end, and coming from a man who has spent his life working outdoors on farms, I was heartened to hear an expert opinion on the subject.  Unfortunately, he undermined this voice of authority by saying “well that was what it said on the ‘Countryfile‘ forecast”.  AAAhhhh…. that’ll be same TV programme we watch on Sundays – a glossy magazine of picture postcard farming for city dwellers who think cows are the size of a large dog (genuine overheard conversation that one) where the rare breed piglets on Adam’s Farm get a little sun cream on the ears to prevent burning.

No that does not inspire great confidence, so we are not trying too hard to guess the size of the next weather front and are avoiding false hopes and discussion about high pressure over England this week-end.

But in the absence any weather to discuss, what can we Brits talk about? 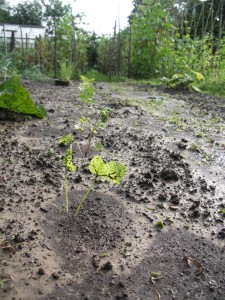 Well, I reckon second on the list, is gardening, so a quick resume of what’s growing on in the borders.  Well, Claire planted out the Sweet Williams and I put the parsnips out.  Both now look rather sodden and sad, but are surviving.  The Heritage Peas have grown magnificently – straight and tall.  Unfortunately, they forgot to flower, so there are five feet of leafy, spindly growth, with six inches of flowering plant on top.  So a couple of handfuls of peas are the best we can hope for.  But only if the bees are able to get out and pollinate, but they are seemingly hive-bound because of – you guessed it – the weather.

The pigs are happy as….well pigs in mud really.  They have discovered that if they dig deep enough they can get to the roots of the blue cedar.  The other morning I discovered them up to their shoulders shovelling away with their snouts – looking intent on digging a tunnel out of there.  Perhaps they are trying to escape this crap weather.  When they ask for a wooden horse for practising their gymnastics I will start to worry.

They are managing to keep themselves busy with rootling around amid signs that they are getting adolescent urges as the smaller puny pig keeps trying to mount his larger brother.  Some sex education might be in order here, but in a blog that is intended to be read by the whole family, I think we will leave it there.  To paraphrase from last week’s court case: he’s a rutting ginger runt.

Elsewhere sex education is also in short supply with the hens who are laying three eggs per day, but Sydney the Speckled  Sussex has been broody for weeks.  Sydney clearly does not understand that however long she sits on those eggs, they ain’t gonna hatch.

But then again, perhaps it’s not the eggs that make her stay indoors – perhaps she too is just fed up with the WEATHER.

But we’re not going to mention that are we?  Just try not to comment on the bleeding obvious. 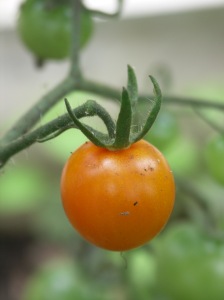 An Orange glow in the greenhouse…
Is it the sun?
No: just the first tomato trying to ripen.

A new house and a new garden. Having spent the past 5 years mainting my father's garden I am now taking on my own gardening project down the road in a new single store dwelling. The Old Man has passed on but he remains in my thoughts as I develop the new patch
View all posts by midlifegardener →
This entry was posted in Gardening Times and tagged broad beans, Charles Prince of Wales, Countryfile, gardening, John Terry, parsnips, Plant, potato, Prince Charles, rain, Sundays, Sydney, tomato, Weather, weather forecast. Bookmark the permalink.