Casualties of the Garden War

The large elder lies in a tangle of branches, wilting leaves and splintered trunk, alongside the dishevelled box hedge.  The young tree had apparently been growing though the hedge, which had lost much of its shape as a result.  There have been suggestions that the elder had been using the box as a hedge “shield” and elsewhere in the garden the sight of another elder growing out of the top of the box – but now dying – would suggest that the rumours have some foundation.

Which is more than can be said for the hedge-bound elder: sawn off close to the ground, its life curtailed.  The result of hack saw and secateurs is clear.  And what is equally clear is that this is no time to be an elder in the garden.  Since the break down of the ceasefire between the gardening authorities and the weeds and vermin in the garden (broken – apparently – by the elderflowers’ unrelenting growth and invasion of further flower beds) clashes have become more commonplace with increasing casualties.

Sawn off at ground level – but they will be back

Most of the casualties have been sustained by weeds and elders whose infiltration of flower and vegetable settlement areas have been on the increase in the recent weeks and – according to the authorities – wholly against the planting agreements.  The Midlifegardener is upscaling his combat operations with not only the heavy artillery, but also chemical warfare against many of the small weeds in and around the sundial and lavender, as well as around the edges of veg patches.

Similar tactics are being employed against aphids which have tried to settle on parsnip plants and there are rumours of massacres on the broad beans as black fly have come under sustained chemical attack. 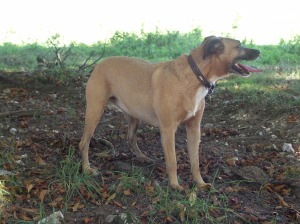 Fudge – the rabbit chaser. “I am not a killer” she says.

Larger vermin have been targeted too.  Well, I say targeted, but the aim of the “peacekeepers” is somewhat random, as the initial attempt to seek and destroy rabbits entailed the use of a “Somerset Hunting Dog” (code-named Fudge) whose high levels of enthusiasm for the job correlated inversely with her effectiveness.  While few rabbits were caught there was a large amount of collateral damage as shrubs and flowers were trampled by the excitable mut.  Since then the Old Guard has been brought in, with sniper fire from the French Windows accounting for a number of large and small rabbits.

All this would presume that The Garden is a place of high security and little freedom for the local inhabitants, but that would be to ignore the underground invasion that is taking place right under our feet as moles infiltrate every part of lawn and bed.  The tunnellings are obvious and have so far proven to be immune to mowing and the deranged stamping of gardeners’ wellies.  Top level meetings have taken place between Gardener, Old Man and Jim, but no effective means of quashing the mole rebellion has been found.

The use of ferret faeces will dissuade moles apparently, but this will only move them to another part of the garden.  And mole traps, according to Jim, have limited success.  So, while battle rages around the garden, the moles look to turn the lawn into their own version of Tahrir Square.  As the oppressors might say, in an attempt at reverse psychology, “let the moles rise up”.

Then at least they might be able to catch a few.

A new house and a new garden. Having spent the past 5 years mainting my father's garden I am now taking on my own gardening project down the road in a new single store dwelling. The Old Man has passed on but he remains in my thoughts as I develop the new patch
View all posts by midlifegardener →
This entry was posted in Gardening Times and tagged elder, elderflower, Garden, Home, Home garden, moles, Old Guard, Personal, rabbit, rabbits, Shopping, Tools. Bookmark the permalink.