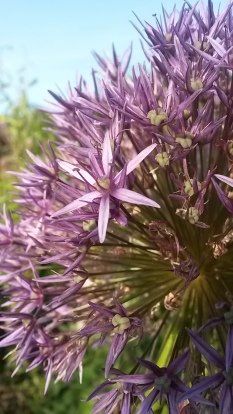 It’s been a month since I put finger to keyboard (or for some I know it would be thumbs to keyboard).   It is an interesting comparison to see how stuff has panned out in the past 30 days.

A month ago it was raining, I was at the end of half term, looking forward to a mad month of end of term activities and report writing. Now the sun is shining and I am on holiday looking forward to weeks of no school and starting to reap the harvest from the springtime planting, potting on and general nurturing.

In June I was worried the garlic was going over and rotting. It was suffering rust (was it the rain?)  and some did – but most are now drying nicely and have been joined by the shallots, spread out in the garage, away from the joists where the swallow fledglings sit and shit.  The Old Man’s reaction to the harvesting of shallots was typical:

“It’s a bit early for shallots”.

“Try telling the shallots” I replied: “they’re falling over”.

It’s been a good year for them (early or not) and many are the size of decent onions. I wish I had planted more now.

Up the top of the garden, a month ago the pig pen was a tangled mess of three foot high weeds.  I put my back into clearing a particularly fertile area of the pen (resulting in a trip to the osteopath) but I reckon it was worth the effort:  the new squash patch is thriving on what I cleared and what the pigs left behind.

Early June the runner beans were just beginning to grasp the canes.  Now they are over-topping them.  The first beans are formed.  The curly kale was being protected by boards – now the kale is big enough to stand by itself and the boards are protecting the cabbages, which suffered some mouse damage.

Mid-June saw the first Cosmos and sweet peas – ahead of the regular 10th July Sweet Pea Day.  And veggies came on stream: courgettes, new potatoes, peas, mangetout and any amount of kale.  And second plantings of lettuce leaves are in full swing when they were non-existent a month ago.

While the over-wintered chillies were originally small and red, they became large and yellow in June and have graduated to orange to proper sized red chillis now.   And this year’s new chillis are starting to bud.

And….much to my relief and Mrs B’s delight…we have the first tomatoes.

(A bit early for tomatoes wouldn’t you say?)

“This used to be fields and trees”

Garlic in the barrow

Beans starting up the pole

A new house and a new garden. Having spent the past 5 years mainting my father's garden I am now taking on my own gardening project down the road in a new single store dwelling. The Old Man has passed on but he remains in my thoughts as I develop the new patch
View all posts by midlifegardener →
This entry was posted in Gardening Times and tagged Cabbages, chillis, cosmos, courgettes, curly kale, cut flowers, Elephant garlic, foxgloves, garlic, kale, new potatoes, shallots, sweet peas, tomatoes. Bookmark the permalink.