Posted on November 7, 2017 by midlifegardener 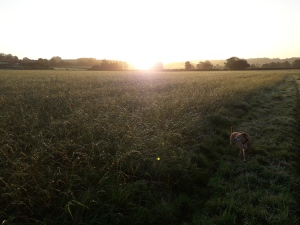 Sunrise on a wet field

It was a wet end to the summer and I never really got the garden under the level of control I might in other years have demanded.  I wrote this piece back in October, before a lot of other stuff happened so I will simply post this and update my loyal readership (both of you) about some of the goings on in my life in the next few posts. Here’s what I had to say in October:

I have continued to reap whatever I have sown, so we are, despite a certain lack of motivation, still harvesting a fine range of autumnal produce.

Some of the squashes are looking good, although I should probably have pruned them a little more:  they have produced an abundance of green foliage drawing on the rich soil in the pig pen, but there have not been a great many fruit.  The butternuts all failed to ripen properly, and I am seriously thinking about never growing them again.  The Uchiki Kuri have been pretty good (the ones that have survived the mice, that is) and the Crown Prince have produced some excellent candidates.  The plants grew up and over the fence and lelandii hedge and I discovered a couple of fruit on top of it this morning.

But looking ahead, I am increasingly like The Old Man:  just grow the reliable Crown Prince – stick to what you know.  They produce large, well ripened fruit that store well and so far as I am concerned, taste just as good as butternut.

It is a constant surprise to me that I can go into a pretty tangled mess of a plot and still come back with a trug full of vegetable joy.  Parsnips, beans, beetroot, tomatoes, green peppers (best ever) all complement the stored items such as potatoes, onions, garlic and shallots.  Our food bills are minimal at the moment.

I have taken steps to use what we have.  I plan to dry some chillis, but have this year actually made some green tomato chutney.  But will it be as good Mrs Chippington’s green tomato chutney which my flatmate would bring back at the beginning of each term at university?  I doubt it – Mrs Chips’s chutney was legendary.

All tomatoes must go

A new house and a new garden. Having spent the past 5 years mainting my father's garden I am now taking on my own gardening project down the road in a new single store dwelling. The Old Man has passed on but he remains in my thoughts as I develop the new patch
View all posts by midlifegardener →
This entry was posted in Gardening Times and tagged chillis, Garden, gardening, green peppers, potatoes, purple sprouting, shallots, squashes, tomatoes. Bookmark the permalink.