Posted on January 5, 2015 by midlifegardener

The autumn is always a time of mixed emotions in the garden, with the last of the summer veg being harvested and the root crops only beginning to get on their way to producing the much relished bounty for the bleak midwinter.  The fall this year was that much more of a time of transition and change for me, spending a large part of my time residing in a boarding house, helping to take charge of a bunch of teenagers.  It has been enjoyable in its way, but as soon as I am home and in my garden I wonder why I chose to be away.  Each time I’m home I take the obligatory stroll down to the veg patch, retracing the steps that my father would always take with my mother on the warm summer evenings when he would come home from the office and they would review and plan the horticultural programme of work.  It was daily ritual, as I recall,  (with a G&T or glass of wine in hand) but something to which I have been restricted these past months to no more than a once weekly viewing at best.  (the walk down the garden, that is, not the glass of wine or G&T).

So what have we achieved in that time – in the final third of the 2014?

Well, with a little help from Josh I was able to clear the main veg patches.  In the interests of low maintenance I have this year put a large amount of cardboard over the open areas to keep the weeds down.  On top of this I spread compost  from the field .  It all looks reasonably tidy now although getting enough cardboard was the main challenge.  But passing the electrical store in Cary just before recycling I was able to collect several TVs’ worth of packing which did the job.  I also unpacked a couple of box loads of promotional shopping bags from the bookshop which had been water damaged when they arrived some months ago and had been sitting in the garage ever since.  (It’s funny how “stuff” just accumulates isn’t it?).  So the garden now resembles a landfill site with the “Books Are My Bag” legend dotted around the edge in some bizarre sponsorship deal.  But there ain’t too many weeds.

In terms of what is actually growing at the moment, top of the class this term has got to be the leeks which are standing tall and proud and thick.  They are going down well in soups and other meals, such as my own recipe of leek and squash gratin. The butternut squashes did not store too well, but we have eaten them all before they went  off too badly.  The Crown Prince squashes are storing excellently and we have just started on our first of the season.  While the butternuts were small but perfectly formed for a single meal, each Crown Prince provides enough for several feasts.  I have no doubt there will be a lot of squash stew and soups consumed – or frozen – over the coming months. 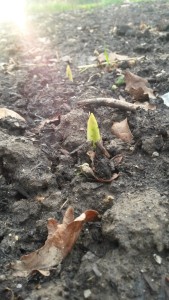 The garlic is still looking good in its plaits, though a lot of the onions have rotted.  It seems as if red is better than white in storage terms, so must make a note to stick with the coloured rather than the white next year. I did remember to get some garlic planted in time for the end of November and just before Christmas we saw the first green shoots coming through.  It is mightily encouraging to see new growth in December and gives the garden a lift during the darkest days.

The brassicas are not looking too good – although we’ve had one or two excellent cabbages and the purple sprouting looks reasonable, if not cropping heavily at the moment.  I’m not sure how much it – along with the Brussels – might have been affected by the plague of caterpillars that had their fill during August.  The Brussels certainly have not amounted to much this year – again – and we only had shop-bought Brussels on Christmas Day – with one or two sorry examples from the garden.

Never mind:  it is not all about the crop, the end product:  the mere process of planting, nurturing and just pottering provides its own rewards in relieving stress and work-related problems.  And anyway, in terms of getting things right in the garden, there’s always next year isn’t there?

Last grass cut of the year

Brassicas with protection from mice

Clearing to get ready for mulching