The Summer in one day

Posted on August 18, 2012 by midlifegardener 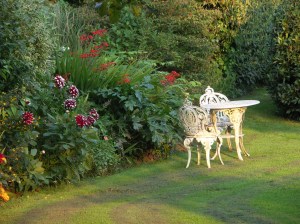 With the summer continuing changeable, one is almost taken aback by a bit of warm sunshine.  Wednesday provided the whole of this season in one day, with light rain followed by torrential rain, which cleared to warm sunshine, during which, with masterful timing I took the dog for a walk.  A good walk only spoiled by Fudge going ballistic at a slightly startled elderly rambler; though Fudge had good cause to complain: the lady was wearing full rambling gear, carrying maps, back packs and hiking stick all accessorized badly with what looked like a yellow bin liner by way of waterproofing.  Enough to freak the most laid back canine.

By the time we returned, the blue skies were being invaded by scudding clouds as the wind got up and blew away any thoughts of a leisurely afternoon sunning myself in the garden.

Instead I prepared the ground for, and planted, lines of swede and chard as well as hedging my bets by planting a couple of seed trays of the same in the greenhouse as well as some small pots of cauliflowers.

At the other end of the reap and sow spectrum, I picked more runner and french beans as well as a courgette (zucchini to our north american brethren) which magically went from the size of a small pencil to torpedo in hours flat.  In between times I had trimmed the tomato plants to stop them taking over the whole greenhouse.

Elsewhere around the garden the are plenty of flowers blooming at long last, with cornflowers for cutting looking good – though how on earth you get them to grow straight I have no idea.  At the Olympic Park they have thousands of the beggars standing straight and tall in vast beds.  Fantastic – but how do they do that?!

The Love in the Mist are finally blooming joining the Nicotiana in the corner bed.  The scent of Nicotiana is so lovely on a warm evening as we go to shut the chickens in.  And lovely set off with the Love in the Mist and the Cosmos.  Elsewhere there are numerous splashes of colour including the infamously blousy Dahlias (The Old Man is very pleased with them – but they stand out in the flower beds like rambler wrapped in flapping yellow plastic).  I don’t know the names of flowers – I am don’t have the brain for it – but they look kinda nice and next year we will hopefully plan and develop the colour schemes a little more.

So yesterday had all the summer in one: sun, rain, wind, cloud, preparing, planting harvesting and just some good old seasonal flowering.

A new house and a new garden. Having spent the past 5 years mainting my father's garden I am now taking on my own gardening project down the road in a new single store dwelling. The Old Man has passed on but he remains in my thoughts as I develop the new patch
View all posts by midlifegardener →
This entry was posted in Gardening Times and tagged cornflower, Dahlia, Flower, Garden, Nicotiana, Old Man, Plant, Sowing, Zucchini. Bookmark the permalink.